My Experience With "Hellenic Pagan" Group 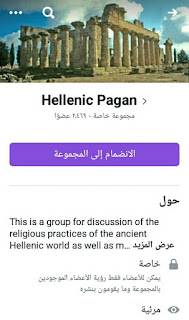 I had to write this blog post as an effort to end the horrific racism and prejudicing that happens in that group, at first this blog post might feel like a personal issue I went through BUT KNOW that it crosses this limit, please read to the last before judging, it really touches what's beyond a personal issue.


I joined this group since I made my Facebook account, I thought it was a good place to learn about Greek religion, I kept reading posts and comments without participating much.

I noticed this group turned into a meme group most of its time making fun of the Greek Deities, I didn't give my opinion at that time and thought it's something I have no relation to although most of those memes and disrespectful posts are coming from non-Greeks, but then things became more dangerous

I started to read posts shaming and attacking ethnic Greek pagans just for disagreeing with them, sometimes it developed into screenshotting their  accounts and posting them in the group and making everyone attack them after deleting the person, THIS IS CYBERBULLYING.

They thought that everyone coming from a Greek background and defending their culture and pointing out to what is Greek and what is not are racists and "right-wing nationalist", those abusers don't understand that you can't love a culture or civilization more than its people, you Can't and Won't EVER love Syria more than Syrians do, or India more than Indians do, and of course, Greece more than Greeks do.

So what does all this mean to me as a Syrian who is just there for learning and is not even a Hellenic Pagan ?

I was scrolling down when I saw a post where the author posted a screenshot of a Tumblr post about Black Greek Gods and a comment of a Greek person saying that Greek Gods are not Black.

the comment of the person on Tumblr is normal but they labeled it "racist", just because it came from a Greek person, I don't understand why they do so, am I racist if I said Canaanite Deities are not Chinese ?

Anyway that time I was fed up with cyberbullying and Anti-Hellene attitudes and I commented that I understand the Greek person and that ancient people used to depict their Deities in their images or a familiar images from their environment like animals and plants, this is why Canaanite Deities for example are depicted with Semitic features and personalities, it's logical and normal and obvious that they won't depict Deities in foreign styles (this is why Egyptians didn't depict one of their Deities having a polar bear head for example) and that it's essential to have "Greek features" for Greek Deities (isn't this obvious ?) then they argued what is "Greek", I told them it's clear and we can distinguish if a Deity is Greek or Germanic by looking at art depicting them or their names, then they said that many Greek Gods are not Greek but are of foreign origins and so Greeks don't have the right to call them "Greek", so I said that saying this means that we can't say that the Shinto Kami are Japanese because about 80% of them come from a Hindu and Chinese origins, or that Canaanite Deities are Canaanite because many of them have Sumerian origins.

when I said that they thought I was a white person and started to point even more fingers on me, and started to say that POC (people of color) have the right to do what they want and change other cultures to fit their personal taste, but then I told them I'm actually a poc, and their reaction ? they laughed and said I'm a right wing nationalist, they practiced anti-semitism along with anti-hellene, by telling me that I as a Semite can't defend my own culture and keep it from their dirty hands. I've been labeled a racist even though being a Semite means I come from one of the most prejudiced groups ever, want me to count the genocides, the ethnic cleansing, the forcing out of the land, the ethnic identity changing my people went through ? I told them that, they deleted my comments and kept the insults towards me and then deleted me from their group (they save me time, I was going to leave that group anyways)

(by the way for some admins there, you can't claim you are from a Semitic descent and that you hate nazis while not having anything in common with Semites and actually allowing anti-semitism on us, don't use semitism as a tool to shame who don't agree with you but then stab us Semites with it)

so NO you can't decide my culture for me, and guess what, you CAN'T decide Greek culture instead of Greeks, period.

Where are they coming from ? what is their mentality ?

Those are white supremacists in undercover, with a colonialist mentality, think about at it, they thought POC people can decide others' cultures but then when I showed up as a POC and told them you can't change my culture as you like they said I have no right to decide my culture ? this is a colonialist mentality that sees itself as able to decide when we are able to choose and when we are not able, just to fit their sickness, and also they use "white shaming" as an undercover, especially to shame Greeks, the Tumblr screenshot showed a reply to the Greeks' comment that tell the Greek person to sit down because they are white! nice try dear white supremacists, you can escape your racism by white shaming Greeks for defending their culture ? I wonder what their reaction would be if a Greek depicted a Native American or Yoruba Deity in a Greek way, let me guess, they will call them colonialist and cultural appropriator, so it's ok for a non-Greek to change Greek culture but not ok for Greeks to change non-Greek culture or even decide and defend their own culture ? I think white-shaming Greeks is a way for post-colonial white people to feel satisfaction and cease guilt, and to miserably find somewhere to belong to, as parasites on other cultures by white shaming them, I understand now why many Greek Pagans don't identify as "white" but "Greek" with or without holding a nationalist political view, it's their own thing to care about, most of them who I know are great tolerant people not even caring about extreme supremacist terms and ideologies.

We, Syrians, Greeks, Algerians, Egyptians and others who try to revive our ancient ways after a long time of discrimination have the right to decide what is in our cultures, to belong to them without dealing with your parasite attitudes or sick colonialist mentality, just like indigenous people in America, Canada, Japan, India and places where native religions still exist, our cultures are not take-and-leave, they belong to us, we belong to them, we exist through them, for those who live in colonialist countries and who actually found themselves born there, there is no guilt for you all, if you like our cultures and thought you belong to some aspects of them, you're welcome, we are known to sleep on the threshold and leave the bed for our guests to sleep comfortably, just be respectful, don't change anything and take what is not yours and trust us that we are generous enough.

BUT for those parasites, isn't it enough that your ancestral colonialist mentality that continue through your sick racist minds fought our cultures, destroyed everything they could, separated us and killed countless of us, then now you sit in your safe homes telling me who sit under your government attacks on my country and survived bombings, shots, aircraft attacks, telling me what is or isn't in my culture ?